Judging by the cover 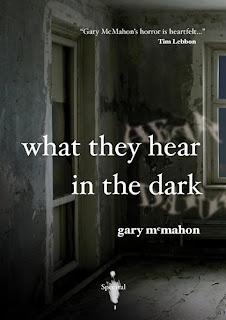 In the autumn of 2010 Simon Marshall-Jones announced he was starting his own independent press that would produce quality very limited edition chapbooks. He’d settled on a name and wanted a logo. I offered to have a go and duly supplied a few ideas. He liked what he saw and asked if I’d have a go a designing a cover.
One of the things that usually lets down independently published books is the poor quality cover art. With the Spectral chapbooks I had the opportunity to design covers that would sit comfortably alongside anything you might find sitting on the shelves of Waterstone's. It was with this thought that I started designing the cover. How would it look on a shelf competing with countless other books, that such a scenario would never happen is, of course, not the point. The cover is ultimately just packaging. It is there to perform a task and that is to catch the eye of a prospective customer. Consumers approach a book by an unfamiliar writer the same way they do any other product; if the packaging attracts (or intrigues) they’ll pick it up and take a closer look. A great cover won’t make a bad book good. But a poor cover may result in a good book being overlooked.
You can’t judge the quality of a book by its cover. A book can only be judged on the quality of the writing and by then the cover will serve only to protect the pages. Perhaps if books were packaged in disposable wrappers like chocolate bars, the cover to be torn away and discarded to reveal just the story within. Would that then be a more honest way of showing the cover’s true worth?
Ultimately, readers are attracted to a book by the cover. art Why else would e-books bother with them?
What I wanted to impart here was some insight into the thought processes involved in producing some of my covers. 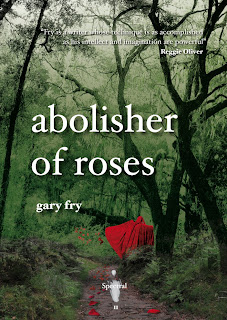 Abolisher of Roses by Gary Fry
This was my second cover for Spectral and, like Gary McMahon’s What They Hear in the Dark, the concept came from the title and back cover blurb only. I did get to see the story before the artwork was finalised, but by then I had a firm idea of what I wanted the cover to show. Sometimes reading the complete story can become a hindrance. It is easy to get hooked up on specific scenes. With less information it is sometimes possible to create something that, while not in any way resembling the story, captures just the right mood. Here we see a mysterious, cloaked figure (we presume is female) leading us along a path deep into the woods. The cascading rose petals, a trail for us to follow.
There is no such scene in the story. But the imagery still captures the essence of Gary’s tale.
The main inspiration for the cover came from a music video by American band Buffalo Tom. Called Treehouse, it features a sinister looking creature in a red dress being pursued by a gang of children through a wood. It was something I hadn’t seen for years. But once seen, it’s never forgotten.
Simon supplied an image of trees he wanted me to use. While this was a perfectly good photograph, it lacked something that would make it work as a cover. It was black and white and very high contrast. The forest was also quite clearly not the English wood described in the story (it's southern United States). Using this image as a base, I added a deep green to give it that dark woodland look. For the footpath in the foreground, I found what I wanted in Sankey Valley Park in Warrington. This I then added, along with other textures to give more depth to the forest. The figure is a pencil sketch, scanned in and coloured up in Photoshop. 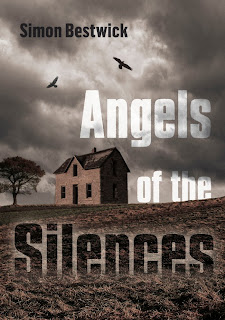 Angels of the Silences by Simon Bestwick
With this cover for Christopher Teague at Pendragon Press, I had only the title to go on. I knew it involved a deserted farmhouse, but that was it. It’s another photo-composite; the field, sky, house, birds and tree are all sourced from different places. The background images are stock photos, while the birds were drawn. 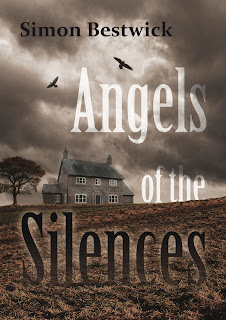 The house in the original version actually sits on the main road to my birthplace, Lymm in Cheshire. It looks nowhere near as foreboding when seen in its natural surroundings. Unfortunately this house proved to be not quite dilapidated enough so was replaced with the one seen in the final version. The typeface also changed, once I’d seen the story, I realised that it needed something more modern looking. Where typefaces are concerned, the simpler, the better.
Oh and remember that field and those birds, you’ll be seeing them again in a few moments. 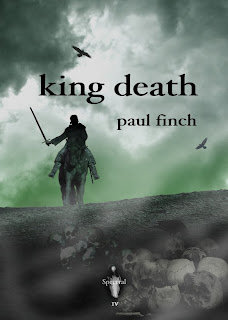 King Death by Paul Finch
Again for Spectral, this cover needed to reflect a landscape blighted by the plague. I wanted everything to look rotten, so you can literally see the pestilence lying on the land. Here both front and back are one piece of artwork. Who would have thought that several hundred years hence this corpse-strewn wasteland would provide the location for a certain farmhouse? Yes, that’s right, the same backdrop was used for Simon’s chapbook. It’s obviously a very bad place indeed, with the same crows wheeling across the same lowing sky for almost a thousand years.
On the cover we see the knight approaching the skeletal remains of plague victims. He’s seemingly oblivious to the sinister looking figure that pursues him n the back cover. 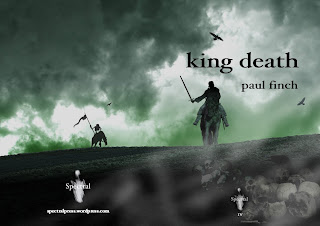 I initially wanted to use something that would look like it had stepped out from a mediaeval woodcut and consulted the works of Holbein and Brueghel. The problem I had was that the figure had to work purely in silhouette, yet had to retain that unmistakable appearance of death, himself. I found exactly what I was looking for in Alfred Rethel’s Death on the Barricades 1849. 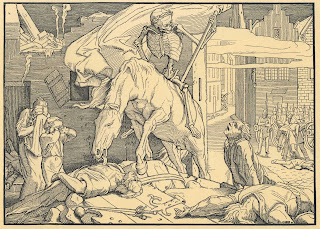 Although depicting a 19th century event, the style is pure Middle Ages woodcut and even in silhouette the figure of Death loses none of its menace.
To be continued...
Posted by Neil at 07:49 2 comments:

Hersham Horror Books Presents5 original stories from the minds of:

Fog can hide anything: from ghostly encounters, to shape-shifting monsters; from buried childhood memories, to creatures born from the mist-shrouded air around you, to atrocities that have no ending, on a train ride into terror..... 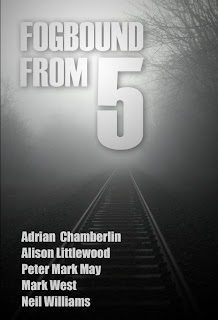 Available from Amazon (UK) in print and kindle versions (Print version should be available in the new year). 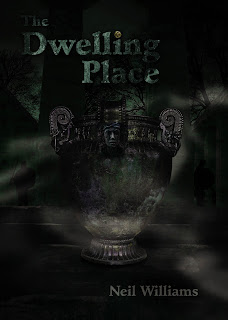 Just started work on a new story - it's still in the planning stage. It's set in Britain during the Dark Ages, a couple of hundred years after the fall of the Roman Empire. It deals with something nasty lurking in the ruins of a Roman temple This is concept art for the cover, I hope that doing this first will spur me on to get the story written. So many stories get started, but very few ever get completed.
Posted by Neil at 11:46 1 comment: 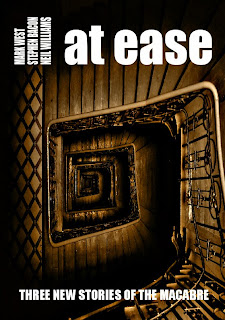 “ill at ease” is the new ebook collection from Penman Press, available from Amazon and Smashwords. Combining the talents of Stephen Bacon,Mark West & Neil Williams, ill at ease showcases three new tales of the macabre.

Waiting For Josh, by Stephen Bacon
Pete Richards returns to his hometown for the first time in years. His childhood pal is dying, and Pete realises he must face the past and confront some ugly truths if he is to fulfil his friend’s dying wish.
But the events of their childhood would prove to hold far more darkness than he’d ever imagined.

Come See My House In The Pretty Town, by Mark West
When David Willis travels to the picturesque village of Hoelzli, for a reunion with his old college friends Simon & Kim Roberts, he expects a weekend of laughter and reminiscing. But on a visit to the local fair, he manages to lose the Roberts’ seven-year-old son Billy and things take a decided turn for the worse.

Closer Than You Think, by Neil Williams
Dave is a loving family man, with a keen eye for a bargain. So when he spots a brand-new-looking child seat in a skip at the local tip, he decides to take it. After all, he needs one in his car to ferry his daughter around. But then he starts to notice things that seem otherworldly yet still familiar.
Could it really be an unquiet spirit, the echo of some past tragedy?
Or is it something else? Something that is much closer to home?


'Here are three writers with singular voices who have, nevertheless, somehow managed to merge their talents to imbue the whole of this slim collection with a kind of menace that is like oil on skin: difficult to remove and persistent. For relative newcomers to show such restraint, to trust in the subtle and the unsaid, is rare indeed. ill at ease is a treat, and I hope it finds many readers.'
Conrad Williams, British Fantasy Award winning author of One and Loss Of Separation

"Childhood memories, a seemingly idyllic English town, a car seat found in a skip... The three chilling tales from ill at ease ably demonstrate that horror can be found in the most mundane places, and a sense of unease is always much closer than we think."
Gary McMahon, author of Pretty Little Dead Things and The Concrete Grove

PenMan Press - penmanpress.blogspot.com
Posted by Neil at 02:30 No comments: